World Cup Soccer Is Upon Us 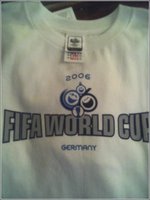 I am so fired up for the FIFA World Cup this June in Germany (I bought this shirt a while back). Gatorade and Nike have started US Soccer commercials already...maybe you have seen one of them. I started playing soccer when I was 6 years old I think and my Dad picked the name 'Kyle' because he knew about US Soccer great Kyle Rote, Jr.

As a refresher course, this is the BIGGEST sporting event in the world. I loved soccer and liked the World Cup every 4 years as a kid, but never realized its global meaning until I spent the summer of 1990 in Veria, Greece (Google). I spent the summer with the Kaprinis host family and Greece was in the Italia 1990 Cup. Whenever Greece was playing in the 'Copa Mundial', the entire town shut down completely. All workplaces were closed and NOBODY was on the streets...everyone in the town was watching the game either at home or a restaurant. It was incredible for me to experience that.

The United States will never be like that because we have so many sports for people to follow and watch and love. When the US hosted the 1994 World Cup, we got closer. We sold out every game and the US qualified to Stage 2. We beat Colombia to advance to that stage which we hadnt done since 1950 I believe. This is how huge world soccer is...the Colombian player who cost them that match was assassinated when he went back home.

My favorite US players are:
Landon Donovan (our best in my opinion)
Brian McBride (33 yrs old like me!)
Eddie Johnson (KC Wizards)
Josh Wolff (KC Wizards)

Here is a cool site to follow your games as well (WorldCupKickOff).

Here is a link on youtube to get you fired up for soccer!

Anonymous said…
Landon is the best, but don't forget our goaly Keller played in the primer league.
1:45 PM

Anonymous said…
Super color scheme, I like it! Keep up the good work. Thanks for sharing this wonderful site with us.
»
3:12 AM